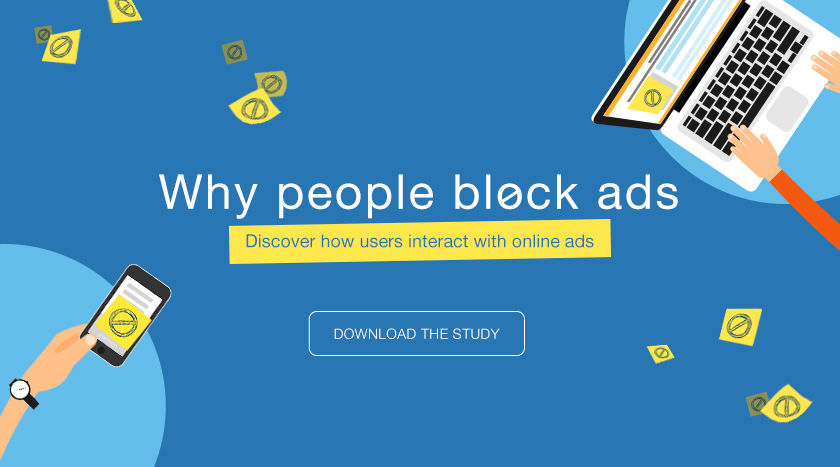 New York – January 27, 2016: Teads, the inventors of native video advertising and a global monetization platform for publishers, today released a comprehensive global study that examines why people use ad blockers online. Notably, the survey, conducted by Research Now, reveals that intrusive and forced ad formats are the number one driver of ad blocker adoption. Three out of four U.S. respondents say that intrusive ads were the largest motivator for installing ad blockers. Additionally, 80 percent of respondents would reconsider installing ad blockers if the ad experience provided them with the choice to skip or close the ad.

Additional notable findings in the U.S. include:

“People around the world have expressed an aversion to intrusive ad formats but providing people choice is a global solution,” said Rebecca Mahony, CMO, Teads. “The rise of ad blockers signals a wake-up call for the advertising industry and we must pay attention to the demands of consumers for advertising that respects their online experience. Teads is proud to offer a solution that gives users the choice to opt-out and we look forward to continuing our mission to inject sustainable advertising into the ecosystem in 2016.”

Teads surveyed over 9,000 respondents globally for the study, representing three groups – active ad blockers on desktop/laptop, active ad blockers on mobile (smartphones/tablets), and respondents who are aware of blockers but have not yet installed. The Teads’ ad blocker study was conducted in major media markets across the world including the United States, Latin America (Mexico, Brazil, Argentina) and the European Top 5 including the United Kingdom, Germany, Spain, France and Italy.

Several interesting findings across the global markets include:

Teads’ flagship inRead format places video advertising within editorial content while the video is visible and gives the power of choice to the user by allowing them to skip the video if they don’t want to watch it. The company’s global premium publisher platform includes Forbes, Slate, Bonnier Corp, The Guardian, The Telegraph, and Nikkei, amongst many others. The world’s leading brands rely on Teads’ native video advertising solutions to reach their target audiences.

Teads, founded in 2011, is the inventor of native video advertising and a global monetization platform for publishers. Publishers work with Teads to create brand new video inventory and manage their existing inventory, monetizing it through programmatic buying, their own sales force, or third parties.

Teads’ native video advertising solutions encompass a series of formats inserted deep into media content, like the inRead playing inside articles. It is changing the game within the video advertising market by creating unprecedented levels of premium inventory, which did not exist before.

Brands and agencies can access this top-tier, premium inventory, available on the web and on mobile, through programmatic or managed services. Through its managed services capabilities, the Teads team execute on their clients behalf using its platform.

Teads has a team of over 400 employees, 100 of which are in the innovation team, across 26 offices in 18 countries.

Research Now Group, Inc., is the global leader in digital data collection to power analytics and insights. It enables data-driven decision making for its 3,000 market research, consulting, media, and corporate clients through its permission-based access to millions of deeply-profiled consumers using online, mobile, social media and behavioral data collection technology platforms.  The company operates in over 35 countries, from 23 offices around the globe, and is recognized as the quality, scale and customer satisfaction leader in its industry. For more information go to researchnow.com.