The Case for Videos of All Lengths

We hear it all the time. Attention is fragmented, especially on mobile. The average dwell time on an ad on Facebook is 1.7 seconds.  As Mark Pritchard spelled out, 2 seconds isn’t enough time to connect, and people scrolling through platforms like Facebook are there for the friends, not for the ads.  Brands are told that the solve for mobile is to create shorter ads.

I’m not buying it.

Everyone watched the 2-minute Colin Kaepernick Nike ad. Why? It was a beautifully done spot that evoked real human emotion. It was risky, it was controversial. But it drove conversation in culture, eliciting enough of a visceral response to lead to some burning their Nike’s in videos online.

Video is one of the most impactful storytelling tools in a marketer’s toolkit.

At Teads, we believe in the power of video, in creative ideas that generate emotion and connection. Emotion and attention are great. But connecting emotion to real business results is where it gets interesting.

In collaborative research with Realeyes, a research company that measures emotional responses to ads, Realeyes found that emotional impact from video ads correlates to sales lift with 75% accuracy. And back to the Nike example, the company has realized $6 billion in increased value since the release of the Colin Kaepernick campaign.

We can agree that emotional connection drives attention. And as you can see in the chart below, the EmotionAll® score1 goes up the longer someone watches an ad. Higher EmotionAll® scores drive sales lifts, so it is actually key to create stories that connect to people and capture attention.

But conversely, the longer the ad, the shorter the VTR%. So, if the metric is just completion rate, a 6 second ad will perform better than a longer ad. 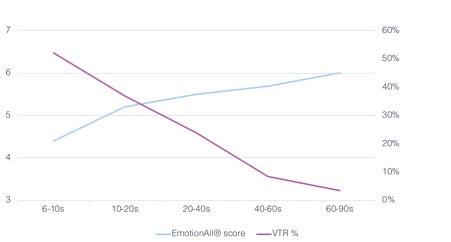 My hypothesis is that we should think of duration in isolation. Marketers need to think about maximizing the point at which the brand can connect with the audience by communicating a story AND see a high VTR%.

90% of video ads on Teads are 15-30 seconds long and see 11.6 seconds of dwell time, 7 times that of Facebook. Our success is proof that there should be a variety in the length of ads.

Our research has shown the efficacy of a longer message that connects with an audience, as well as the impact from a shorter, 6 second ad. If brands want to maximize their engagement, they should have a variety of ad lengths in their toolkit to capitalize on both the emotional connection of longer form ads as well as the shorter, snackable ad format.

So, what does this mean practically? As a next step, brands should measure different durations together. In one example from Real Eyes, we actually saw a 6 second ad get a higher emotional score when combined (shown after) the 30 second spot. It drove brand recall of the longer ad, which ended up in higher scores for both.

Six second ads are one tool in the marketer’s toolkit. Because our brands are being pushed to create shorter ads, we commissioned research to help create better short ads by using tactics that drive up the EmotionAll® score. Check out our next post on the top 6 ways to make 6 second ads work.