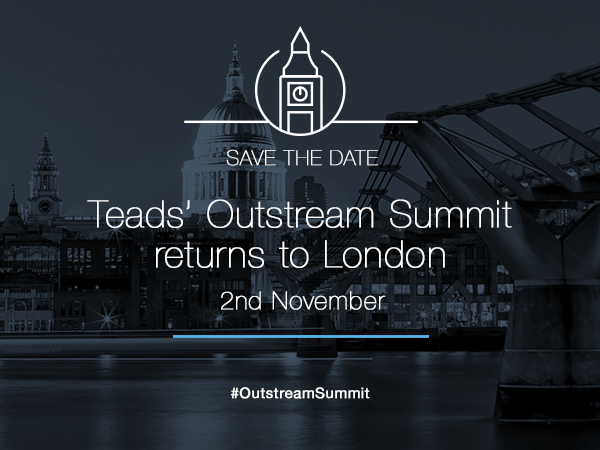 After a year away, the Teads Outstream Summit returns to London on November 2nd. Register your interest today!

Bringing together publishers, brands and agencies, our Outstream Summit will discuss:

– How the new consumer is taking control

– The real metrics for success in video campaigns

– How digital publishers have adapted for their audiences

– Can we consider outstream advertising mainstream

And more! We’re excited to reveal some of the speakers who will join us there: Aniq Rahman, Rebecca Muir, Caroline Hugonenc and Tom Laranjo.

Aniq Rahman is President of Moat, an analytics and intelligence company focused on digital advertising, allowing advertisers and publishers to evaluate and optimise digital advertising by measuring attention. Based in both New York and London, prior to joining Moat, Aniq was CEO of Instinctiv and recently spoke at our Video Summit at Zurich.

Premiering new research commissioned by Teads will be Rebecca Muir, Head of Research and Analysis at ExchangeWire. With an extensive background in media and ad tech, Rebecca launched ExchangeWire Research in 2014 which covers issues critical to marketers in a neutral and informed perspective.

Joining Rebecca on stage will be Teads’ Caroline Hugonenc. As VP Research, Caroline oversees Teads’ global research including investigations into ad effectiveness, why people block ads and the future of video advertising.

Last, but by no means least, Tom Laranjo will also be speaking at the Outstream Summit. Tom has held the position of Managing Director at Total Media for 4 years. During his time at Total Media he has worked in a variety of roles, from media planning and buying to heading up the agency’s insight team. Tom remains hugely positive about the future of media and thinks that agencies have an amazing opportunity to redefine their roles and contribute more to clients’ growth.

Learn more about the Outstream Summit at IAB Engage this week. Catch Justin Taylor talking about ‘The Power of Choice’ on Day 1 at 12pm and Emi Gal discussing ‘What do AI bots have to do with advertising?’ at 2.40pm.