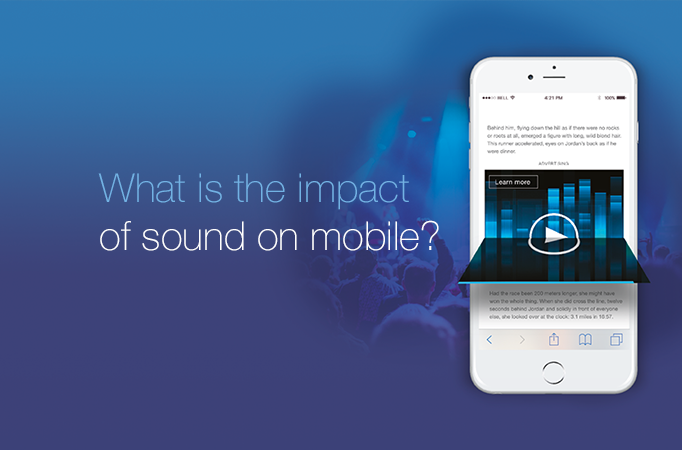 Sound Off or Sound On? The Impact of Sound On Mobile Advertising, and How To Design for Sound Off Environment

Most marketers believe that audio is a critical element in making successful TV ads. But in a world where mobile has become our primary device, marketers should think about mobile as a sound off environment, where users hate being interrupted with sound.

At Teads, we have been researching this topic for the last 2 years. We discovered that a video autoplaying with sound on was one of the primary motivations cited by users for installing an ad blocker. This insight led us to make our Inread format sound off by default, giving the user the option to turn the sound on if she wants. Eventually, the industry as a whole acknowledged that sound on can be intrusive to user experience, and thus moved towards stricter autoplay policies. As a result, Google Chrome and Safari no longer allow this type of video ad to load in their mobile browsers.

To better understand behaviors and attitudes towards sound, we conducted a survey in 10 countries on mobile users.

Our findings showed that 60% of users in the UK and 77% of users in the US have sound on by default on their mobile device. 66% of respondents in the US and 54% in the UK declared they hated when video ads automatically played with sound. Sound on ads that play while viewing news sites or when one is in a public place were distinct annoyances that users called out in this research. Different platforms approach this differently. On YouTube, sound on is the norm, whereas on Facebook and news sites ads can play with or without sound.

More than 1/3 of users enjoy watching videos with subtitles on their mobile but the proportions are much higher for Millennials and Gen Z (54% in UK and 66% in US for 16-24 year olds). This trend is growing with nearly ⅓ of users stating that they were watching more videos without sound vs. the prior year.

How do ads with the sound off perform versus ads with the sound on? To address this key question, we tested both the sound on and off version of more than 240 ads to identify the impact of the lack of sound in terms of emotional engagement and branding. To conduct this research, we used two leading measurement companies: Realeyes for facial coding and Millward Brown for post-exposure questionnaires (Link testing).

What did we find?

At the broadest level, sound on ads had an average emotional score of 3.7 (in a scale of 1-10) whereas sound off ads scored 3.6; in essence, they performed as well as their sound on counterparts. However, we broke the data down into 3 distinct groups in the sample.

For the 1st group – those ads where sound off performed better than sound on – we found two key drivers for poor performance.

For the 3rd group, where sound on ads performed better than sound off,  we identified one important insight: ads which included voice over and subtitles did perform as well as when viewed with the sound on. In order to improve performance, marketers should think about adding captions for ads with voice-over or dialogue.

At Teads, our Studio creative team is leveraging the tactics above and working to optimise all sound off creative to perform as well or better than their sound on counterparts. Through both emotional testing from Realeyes or more traditional Link testing with Millward Brown, we are seeing the benefits of our expertise on the impact of sound in the mobile environment.

As mobile rivals  TV in ad spend, it is time to think differently about mobile and challenge our traditional assumptions of ad effectiveness. At Teads, we are convinced that this silent mode of consuming ads is ripe for creativity about how to better engage users.