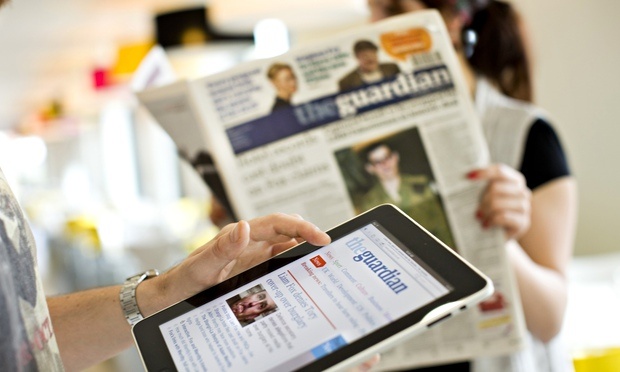 Publications report overall losses, but gains in digital for Q1 of 2015

At the onset of the digital revolution, just as tweens were building out their online profiles and iPod screens were becoming less pixilated, the world’s most iconic newspapers noticed a dramatic drop in their base of loyal print subscribers. Following suit, spending on print advertising slackened, as advertisers swiftly re-located their budgets to properties hailing higher traffic rates.

The extinction of coffee-creased Sunday papers seemed suddenly upon us. Apathetic paper headlines fired ominous warnings about the death of journalism, dishing desperate advice on how to “survive” this trend. Debates about whether or not students should pursue a journalism major raged – where’s the money to be made?

The steady decline of print media remains alive and well today. Just last week The Pew Research Center published its State of News and Media Report 2015, declaring that newspapers’ print revenue fell 4%, along with a 3% decrease in weekday and Sunday circulation from 2013 to 2014. Soon after Pew’s findings were released, on Friday The New York Times declared a $14 million net loss for Q1 of 2015, attributing much of the dent to a “drop in lucrative print advertising.”

Signs of an abrupt pivot back to the good old-fashioned days of paper consumption are long lost, but journalism is a long breath away from dead.  While Time Inc. declared its weakened print advertising scores, it proudly trumped that its losses have been “tempered by digital growth,” smack dab in its headlines.Gannett and News Corp ran similar reports on their overall Q1 revenue slumps and positive digital growth. It’s not that audiences care less for reading content; rather, they prefer to do so on their desktop and mobile screens. It’s clear that honing in on digital strategy is vital to staying relevant. Take, for instance, 158 year old publication The Atlantic. At the ripe age of 158, the publication’s increasing online audience, especially on mobile, claims that digital advertising now accounts for more than half of its overall revenue. This dramatic rise in profitability inspired the publication to refresh its website with a responsive design, ensuring that the quality of its advertising content is top-notch across all screens. Similarly, The Wall Street Journal was recently profiled by Digiday on their initiative  “crank out 40 videos per day” to keep pace with advertisers’ demand for more digital video inventory.  A traditionally paywall-strong publication, WSJ has optimized its web property to feature videos for anyone to watch, share, and engage with. Both The Atlantic and Wall Street Journal are healthy.

At Teads, we’ve taken note of the growth that publications can enjoy through digital advertising. That’s why we’ve pioneered outstream solutions, like our first-to-market inRead video format. By placing video campaigns within editorial content, inRead eliminates the cost and hassle of producing original videos for instream advertising. Teads’ inRead serves as another innovative way for publications to raise their revenue streams amid print media’s rapid decline.

The “death of journalism” has turned out to be a load of hot air. People still love newspapers. As more and more headlines barrel in, blaring sirens about publishers’ dismal Q1 revenues, bear in mind that journalism’s heart will beat on, thanks to an oxygen tank fueled by digital.