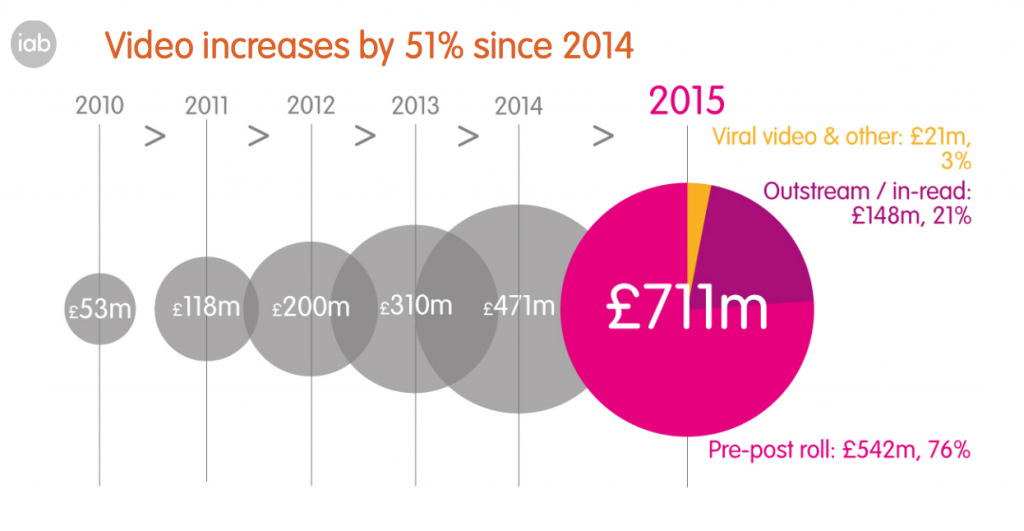 Outstream is 21% of the UK video market

The UK IAB have once again released their 2015 full year ad spend study in association with PwC. Much to our delight, outstream video has been measured at 21% of the UK video spend, which equates to £148 million!

The uptake of outstream by the UK’s premium publishers and top brands means that while we’re obviously delighted, we’re not completely surprised by these amazing results! Teads recently topped comScore’s Video Ad Ecosystem globally and with outstream now part of the mainstream we predict further incredible growth for this format.

The IAB’s census of media owners includes online, mobile and tablet spend which is split out into display, classifieds, search and other.

The results show a great outlook for the UK digital market which is now worth a phenomenal £8.606bn in 2015. Once again display has increased its share of digital in 2015, with the highest like for like growth from 2014 at 24.5%.

When taking a deeper dive into video spend, online video accounts for 23% of display at £711 million. As the graph shows, this breaks down into pre-post roll at 76% (£542 million), outstream at 21% (£148 million) and viral video at 3% (£21 million). This is the first year that outstream has been measured as a separate category.

The IAB also provided insights into the state of programmatic trading. In 2014, 47% of

It looks like there’ll be more exciting disruptions happening in the UK digital market and we’re pleased to be pioneering the way with our formats.

IAB members can read and download the report here.