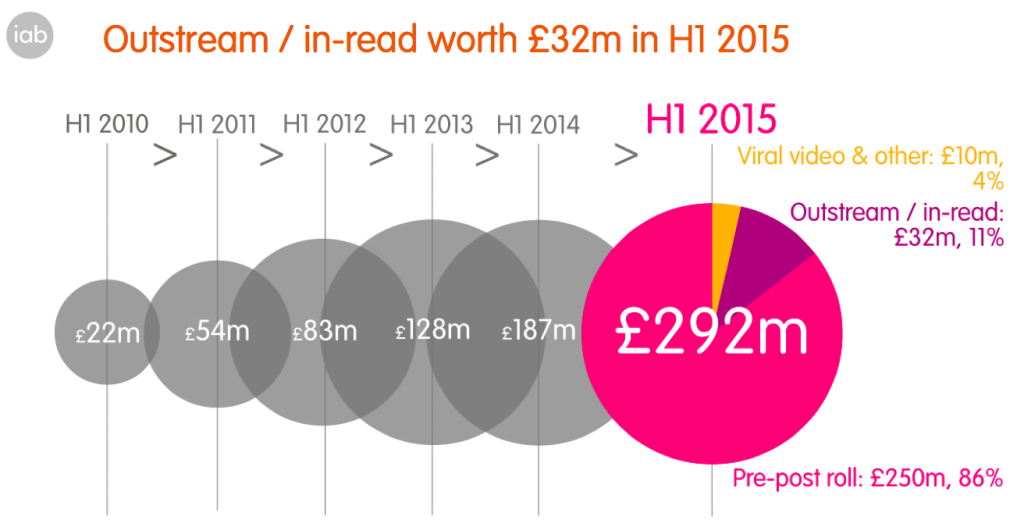 As predicted, 2015 has seen huge digital growth, with the UK market now worth £3.975bn. This is a massive increase of £468m year-on-year. The report compiled by the IAB and Pwc, is comprised of online, mobile and tablet spend submitted by 77 participants, giving an insight into the current UK digital ecosystem.

For the first time, outstream video advertising was measured as a separate category and was estimated £32 million, 11% of the total video market. As the inventors of outstream video, we’re extremely proud that it’s been recognised as a distinct category and that it’s representing such a significant part of the market. Proof, if ever it was needed, that outstream is now mainstream.

As for the mobile market, this once again shows incredible growth, up a massive 51.2% from H1 2014, and worth £1.079bn. Like online, this saw increased spend on display, up to 48%. Forecasts for 2015 continue to look positive, with the UK advertising market on the whole predicting +6% rise. This chart shows mobile ad spends incredible growth in the last year. With the IAB stating that mobile now accounts for 27% of all digital advertising, this is a great visual that shows just how far it has come.

Find and download the full ad spend report from the IAB here. Join us at IAB’s Video Conference where UK MD, Justin Taylor will be discussing the ‘£500 Million Question?’ on November 26th. Get your tickets here and get in touch to book in a meeting with our Sales and Publishing team.