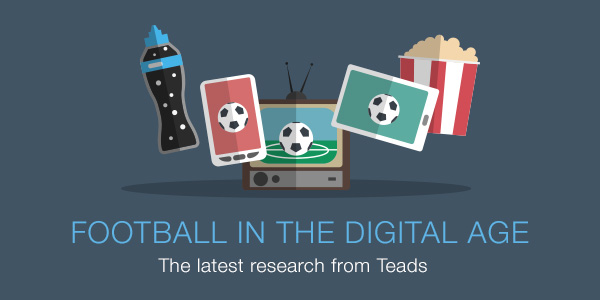 Football in the digital age | New research from Teads

With just 18 days to go until the Euro’s kicks off, the team at Teads were interested in understanding football fans media consumption.

Kantar’s Global Sports Media Report in 2014 described the year as ‘a watershed’, as for the first time online was the second most popular way to access sport, behind TV (but ahead of print). Two years on, the environment looks much the same – but exactly where are the football fans and what are they interested in?

Immediately after the match ended, we asked over 1000 respondents in the UK and France about their media consumption before, during and after the match.

The findings provide some great insights that will be useful for marketers planning for the Euros, where eyes across Europe will be glued to TV’s – and more interestingly, to their mobiles and tablets. The findings revealed 67% of fans used social media during the game, 36% were on sports sites and 21% on newspapers.

Other key findings include:

– 60% of French football fans head to sports sites for information on global football updates, while 50% of UK fans head to the sports sections of newspapers

Find the study and our one pager in full here.