A Guide to Outstream Video Advertising 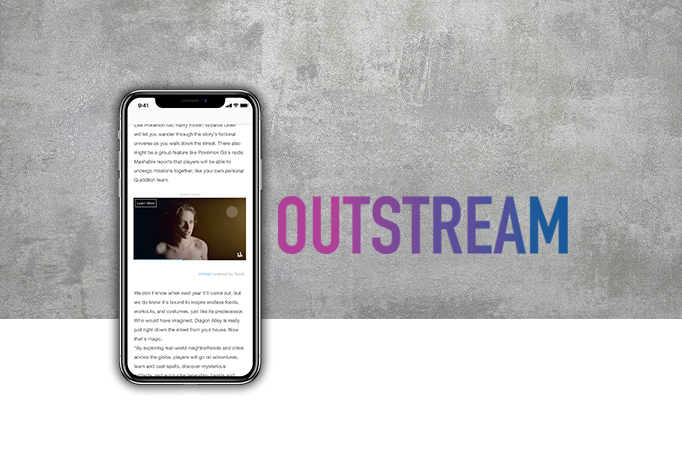 If you’re a marketer or work in digital, chances are you have run into outstream video advertising. This advertising tactic is characterized by video ads that appear in non-video based editorial content. For example, if you’re reading The Economist or Buzzfeed, and you come across video ads that appear organically—as if they’re part of the article you’re reading—and they start playing when you scroll over the ad: that’s outstream.

Outstream is even more prominent today in a social media dominated world in which users scroll through content and updates. Teads is actually shifting from the term outstream to the term inRead, as the user scrolls (whether on social or in editorial), video content appears.

But this is a 101, so let’s take a step back. What exactly is outstream vs. instream?

The phrase “digital video advertising” probably makes you think of the quick clips that play before (pre-roll) or during (mid-roll) a video you want to watch on a platform like YouTube. This is instream—and it’s been a part of the digital ecosystem for years.

Outstream is a completely different version of digital video advertising because the video content is within the article on the page. It is a more engaging, nondisruptive ad experience in which the video plays only when the ad is in view. A few key highlights of outstream are below.

Outstream does not rely on existing video content, making it a more flexible format, creating compatibility with nearly any publisher.

Research by Teads has shown that 66%  of US users declared they hated when video ads automatically played with sound. They also hate being disrupted when watching video content. Instream ads by definition interrupt a user’s intent to watch a desired clip with either pre-roll ad (an ad before the video starts) or mid-roll ad (an add in the middle of the video). This can be frustrating for the viewer, especially if the ad isn’t appropriately targeted and can also risk creating a negative brand association.

With outstream, there’s no jarring interruption. The ads blend into the editorial content, auto-playing as the user scrolls through. If the user is intrigued, they can hover on the video, click to play sound, and engage. As the user continues to scroll, the outstream ad is automatically paused. These ads work more in tandem with the content, without being overbearing. This gives the user the opportunity to choose to engage with the ad.

One key challenge with instream video is that in a social environment, the content is all user-generated content, or UGC. Fake news, data breaches, and fraud are a growing part of today’s conversation as platforms, publishers, brands, and technology companies navigate the realm of data and privacy. Brands are increasingly concerned about ensuring that they are not associated with scandal, or surrounding content that isn’t brand safe.

Nearly three in five US CMOs surveyed said they had increased their spending on provably brand-safe digital channels, and most had also reviewed their agency relationships in light of brand safety concerns.  CMO study, Teads, November 2017

Simultaneously, consumers are moving toward more trusted channels. According to In News We Trust 2018, over 75% of respondents are more likely to seek out trustworthy publications because of fake news.

Working with a partner that connects the world’s top publishers in high quality, brand-safe environment is one way that brands can avoid problematic content.

Why Should I Care About Outstream?

Outstream has markedly more potential as an ad format than instream—and the numbers show it.

MarketingLand reports a recent study which found that click-through rates (CTR) for outstream placements was about 2.5 percent—higher than the average instream CTR. Teads found that when compared with instream ads, outstream placements were viewed for 25% longer. Plus, we noted a 10% increase in awareness of the ad versus instream. It’s no surprise that eMarketer reported that 77% of agencies and 70% of advertisers prefer outstream ads. Not only that, but Teads sees an 11 second dwell time on video ads, vs Facebook at 1.7 seconds.

These numbers are crucial. They represent a shift in the market as consumers begin to respond differently to digital video ad campaigns. Advertising, on the whole, is evolving—with video becoming a huge source of ad and media spend. In 2018, video ad spend made up 25% of total ad spend at $27.8B. As consumer attention span gets shorter and shorter, the onus is on the advertisers to make shorter, more exciting ad tidbits that compel clicks.

Teads is committed to serving quality, brand-safe in-article placements within premium content. Outstream was a term that Teads coined and that became crucial to explaining the format when it first launched. However, we believe that the market has evolved and so to should we – it is time to sunset the term Outstream in favor of inRead. The idea is the same, but with the scroll functionality on phones becoming the prominent way we consume content, having term for video that is within content seems outdated. Check out the innovative inRead options.