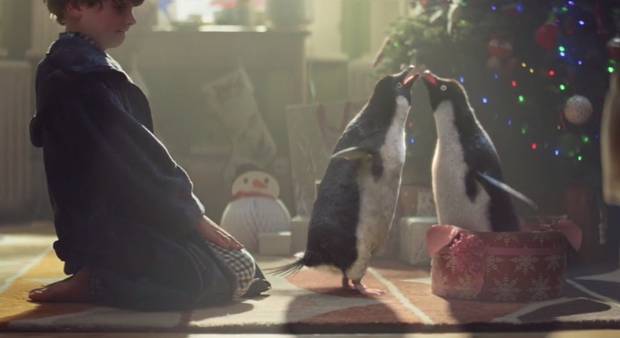 6 great Christmas ads to hit our screens this season

Our pick of the Christmas adverts doing the rounds this winter.

Following a young girl as she attempts to make Gingerbread for her school bazaar, failing until a helpful employee gives her some tips. The soundtrack is Dolly Parton’s ‘Try’ sung by members of the public, which is available to download from iTunes and with proceeds going to charity. Perhaps not quite as engaging as that of its sister company, John Lewis, but it showcases the unique qualities of Waitrose and that all their workers are also partners in the company.

100 years after the outbreak of World War 1, Sainsbury’s have partnered with the Royal British Legion to make this powerful Christmas advert. It shows the moment when on Christmas Day 1914, a small part of the German and British troops fighting on the Front Line had a temporary truce and played football as ‘Christmas is for sharing’. The featured chocolate bar with historically accurate packaging can be bought in store in the run up to the festive period with proceeds going to support the British Legion. Of course this advert is not without controversy, with accusations by some that it romanticises war, something that Sainsbury’s tries to counterbalance with videos on their YouTube channel explaining how and why it was made and how they have tried to keep the ad both respectful and accurate.

While the M&S advert may not be hugely memorable, it can be argued that their digital strategy has been more impactful than others. The Twitter account @TheTwoFairies has over 27,000 followers and counting. The account was set up back in October (!), and since then the fairies have been flying across the UK granting wishes. From gifts of flowers and chocolate to bringing snow to the most Southerly school in Cornwall, the gifts are thoughtful and well-received. Tweeting only in rhyme, it wasn’t until November that the full length ad aired during the X Factor and it was revealed Marks and Spencer were behind the two fairies. #Followthefairies and spread some cheer.

It’s the early hours of Boxing Day, it’s snowing (it almost goes without saying that snow features in all of these adverts) and the roads are deserted. But Christmas lights are being turned on, presents are wrapped and family members are struggling to stay awake. A nurse finishes her night shift and returns home where she is surprised to find her family waiting for her, having delayed Christmas Day celebrations, ‘because she’s special’. It’s low key but relatable.

In an interview with The Drum, the agency behind this advert and ones in previous years, Adam&EveDDB said that they never set out to make people cry at the adverts, Ben Priest the founder and executive creative director, believes that having that aim would be ‘too manipulative’. Nevertheless, feedback on this advert which shows a little boy with a vibrant imagination, believing that his toy penguin is real and looking for love shows that it has been a bit of a tear-jerker. This ad has now reached almost 16 million views on Youtube and it’s not even December yet. Also worth watching is the reaction to the advert on Gogglebox as seen on The Drum.

The YoungOnes are an online apparel company who made this spoof of the John Lewis advert in a day. It features a penguin called Jonty rather than Monty, some romance and the same Tom Odell track, but it differs slightly from the original. A Christmas advert which will make you smile rather than cause emotional overload.